as we bask in the warmth of a dying star 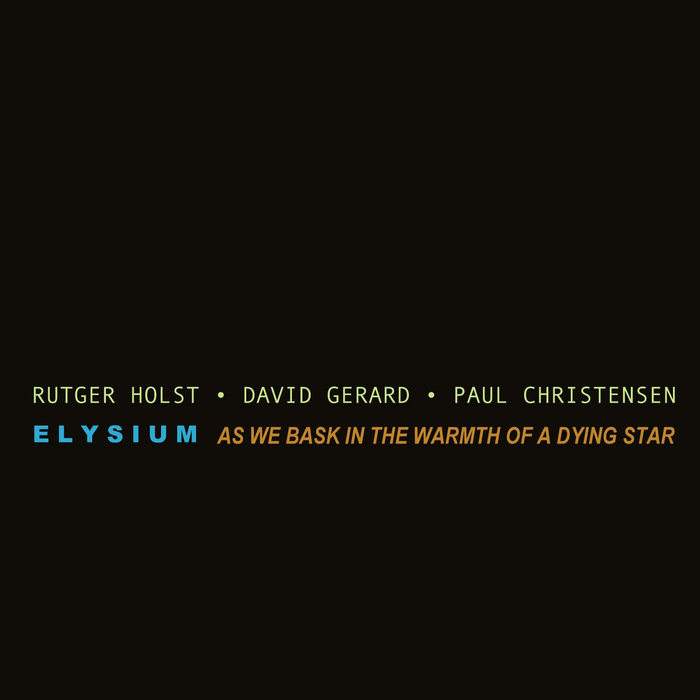 When David, Paul and I conceived of performing as a trio, it was with the understanding that we would record and release three albums together - a trilogy if you will. Part One was "First Light", which came out in 2007: our aim was to meld minimalism with Berlin-school electronics, and was met with positive reviews. Part Two was "Found Noises And Sonic Detritus", released two years later. Very few of our fans were aware of its release, despite being on sites like iTunes, Amazon and Spotify, and though it was on the Orbiting Orion imprint, it seemed as if folks who wanted another "First Light" were greeted by a more ambitious outing.

We hardly eschewed minimalism - however, we began integrating elements of fusion, drone and even what some would label "minimal techno" (a term I vehemently despise). In retrospect, though none of us would change a thing, we had anticipated our sophomore release might be a hard sell, and so were not completely taken off guard by its failure to register a blip on the sonic landscape. The three of us regrouped, and thought about what we wanted the last piece of the "trilogy" to sound like. David came up with the concept of doing a 2 album suite, conceptual like the first album, but approaching the composing in a more linear fashion.

These sessions began in the Spring of 2010 - sometimes we met in studio and recorded direct to digital as a trio, sans overdubbing; sometimes we constructed pieces through file sharing, and sometimes we just got together and wrote something spontaneous and unedited. We were halfway through the process when we got a call from Paul - seems his home label, Gestalt was not happy with him doing yet another side project without consulting them, and so we were essentially slapped with an injunction, forbidding us to continue or to release what had already been committed to tape. Four years of going back and forth with the label, to no avail. Finally, in 2014, Paul's contract was up for renewal. Not happy with how Gestalt handled things, he did not renew - not only that, he bought the rights to all the Elysium recordings done after 2010, so there would be no legal wrangling over them being made while still under contract.

In late 2014, we poured through nearly 9 hours worth of music - probably enough to release at least another 3-4 recordings, but David brought us back to the original concept, and so here is the "double album" that remained in the vaults, until now. Over 90 minutes long, it aspires to the best electronic concept albums of the day, with a variety of sonic signposts and musical influences. I came up with the title - it's a line from the poem "Living Precariously" by Daniel Lewiston; it seemed to fit the overall theme of life being transient and temporal, and also helped us to whittle down and fine tune which tracks ended up here. As swan songs go, we are all extremely proud of our endeavors, and the closing track almost seems like either a cliffhanger or anticlimax, I'm not really sure. But this is and will be the last offering from this aural conglomerate. Bathe in its light, while it still shines. Namasté.

I am a 36 year veteran in the field of electronic music.

Listen to my music on Modul303, RadioSpiral, SomaFm and KCBX FM.

Purchase my music through Spotify, Amazon, Apple Music and other digital outlets.

Follow me, and receive exclusive offers and FREE CONTENT! And don't forget to stop by the other sites linked herein.

Peace be with you, my astral travelers. ... more

If you like as we bask in the warmth of a dying star, you may also like:

Bandcamp Daily  your guide to the world of Bandcamp

Serena Cherry debuts her black metal project, plus a Pick from the Crypt block from Svalbard